Never Be Afraid to Try 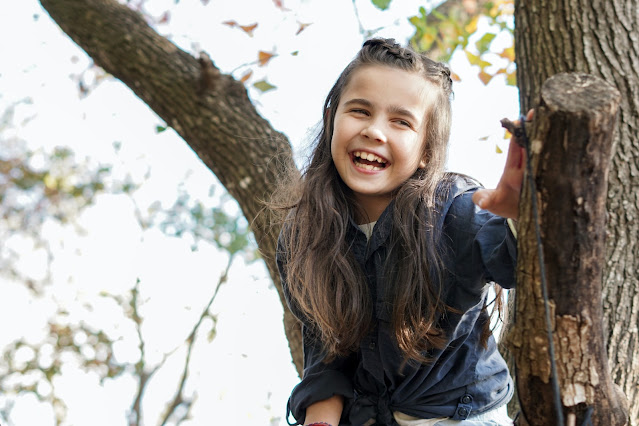 When I was a little child, I ran with joy when I felt like it.  I skipped.  I climbed trees.  I jumped from rocks.  I paddled with confidence in the shallow end of the pool, my father nearby.

I never knew I wasn't athletic, or agile, or fast until a P.E. (physical education) teacher told me.  Even other kids didn't bother with whether I was fast or not when we were playing tag or hide and seek.  It was just fun, and I moved easily in my body.

But in 5th grade I couldn't meet the President's Physical Fitness requirements in school.  Never mind that I was more than a year younger than my classmates, so should really have been held to a lower standard.  It didn't matter, because everything changed anyway.  I no longer moved with joy.  I had started comparing and rating myself against others, and learned that I was lacking.

I know some children receive this outside assessment about themselves when they are younger than I was.  They aren't performing at the expected level in reading or math.  Or perhaps they're just quiet, a little too shy and gentle compared to other children.  Or maybe they're a little too loud, active, or emotional for the classroom regimen.

Given time, most children will gain the maturity or confidence or have been exposed enough times to a new concept to do well (or at least well enough).  But if they've already learned that they don't measure up, and every day receive reminders that they should dread failure, then perhaps they will never do as well as they might have if they had not been told they weren't any good at it.

Eventually we grow up and get on with life.  But that fear of new or hard things might persist.  That fear of failure, of not being good enough, can follow us, even when we have had other successes.

So when a difficult task looms, we tend to avoid it.  We might spend hours on easier, less important tasks, even if ignoring the hard, important task creates a problem.

How can we overcome this fear and do what needs to be done?

This is not like when we were children and had no say in when or how something should be done.  We're adults now, and we get to develop our own strategies for dealing with our tasks and responsibilities.

2.  Start at the beginning.

Rather than worrying about the entire task (and letting its largeness or difficulty discourage us), we can focus on a small portion.  If we just think about that first step, we're more likely to make a start, and once we get started, we often feel more confidence and inspiration to keep going.  Or we can do Part Two later, after a short break.

This idea comes from Leo Babauta over at Zen Habits.  If making a decision causes you to freeze up for fear of a mistake, you're going to stop doing the difficult task.  Try to short circuit that defensive response.  Just choose, and trust that you made a decent choice, or that you'll be able to deal with the results.  This frees you, because you begin to choose, choose, choose, and start to trust yourself without fretting so much.  Simply developing the confidence that you can make a useful decision causes you to be better at making decisions.

4.  Think of failure as part of the learning process.

When we fear making a mistake, it's because we think that means something bad about us – that we're inadequate or dumb.  But what if we think of mistakes as part of the learning process, meaning nothing at all about us and everything about this new endeavor?  Then instead of fearing failure, we can let it teach us.

This is how all great things have been accomplished, after all.  No one is born knowing everything – everyone starts at square one.  Even the world's greatest geniuses have endured failure after failure.  Even Stephen Curry (paid link) was once new to the game of basketball.  He was brave enough to be less than perfect at it and continued playing until he honed his talents.

It's just a simple rule of life – we are all bad at things we've never done.  This is basic logic.  So why do we beat ourselves up when we start doing something and it doesn't immediately go well?  Can we please extend the same grace to ourselves that we would unquestioningly show to another learner?

I no longer run with joy.  I don't run at all, in fact.  I don't climb trees either.  But I wish someone had told me that simply remaining active was more important than running at a certain speed or doing a certain number of sit-ups in one minute.  I wish I would have felt less defeated and hopeless by my inability to meet someone else's standard.  I think it would have made a difference.

Or maybe not.  I may not have been an athlete, but I found other things I did well, and I devoted a lot of passion and effort toward getting even better.  I can sing, I can write, I can teach, my grown children still like me, and so does my husband of 37 years.  Who cares if I'm athletic?

So I hope you already know what it took me so long to learn:

1.  Don't worry so much about other people

Photo by Izzy Park on Unsplash