How to Let Go of Sentimental Keepsakes 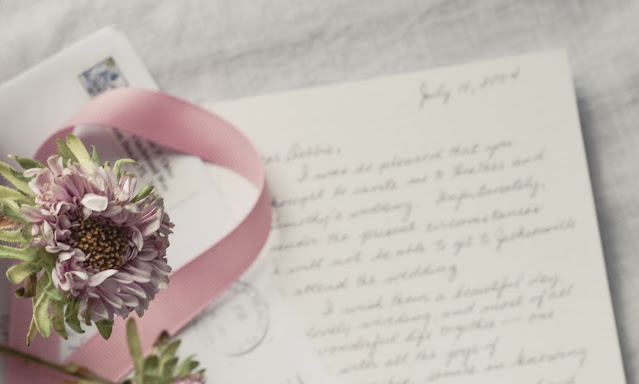 Letting go of sentimental items is certainly the most challenging decluttering task.  Please don't tackle it until you've done the easier stuff.  Reduce the number of items in your kitchen, bathrooms, junk drawers, coat closet, tool shed, game cupboard, wardrobe, and bookcase.  By that time, you will have built up your "decluttering muscles" and refined your process of decision-making.

Let me give you an example of the process I went through when I pared down a number of meaningful keepsakes while making what I kept easier to enjoy whenever I choose.

My grandmother wrote me approximately once every month or two from the time I was about ten years old until several months before she passed away in 2005.  That's more than 30 years' worth of letters!  There were many I did not keep after I wrote a reply, but I still had several dozen when she died.

This correspondence was a lovely thing that Grandma did, and I knew, for all of those decades, that even though we only saw each other once or twice a year, she was thinking about me very often.  But truthfully, almost all of the letters were about the weather, or how her chickens were laying, or how her garden was coming along, or something about a trip to town, a service at her church, or a visit from one of my uncles or cousins.  Grandma was not a highly educated or well-traveled person – she was simply a wife, mother, and grandmother with an 8th grade education, born on a California homestead in 1914.

I realized that it wasn't really the content of her letters that meant so much, but just the fact that she had taken the time to write and send them.  I'm not ever going to forget that!  So I was able to find one letter where she happened to be telling me about her experience of conversion and her life as a Christian, and a bit about what it meant to her.  I kept that one letter and put it in a scrapbook next to a 1950 photo of her, my grandfather, and their six children (my mom was the oldest).  I only have three scrapbooks, created over the last 30 years or so.  When I want to take a trip down memory lane, there are my memories, right there, including this wonderful letter and photo.

If I had done what so many of us do, which is to keep everything, put it in a box with some other stuff, and then store that box somewhere, I would not be able to access this letter with such ease.  In fact, I might not be able to access it at all, especially if I were in the habit of keeping every card, letter, child's drawing, wedding invitation, thank you note....  I might not even remember what I had kept.  It would just be boxes and boxes of – let's be honest – junk.

Instead, if you were here at my home today, I could get to Grandma's letter in about one minute to show it to you.

Choosing the best, most distinctive of your treasured keepsakes and displaying them prominently lets you enjoy them so much more, while helping you feel free to get rid of the rest.  Your fond memories are made tangible, but the load of physical items doesn't feel like a mountain.

And when I come to visit, you'll be able to show me what means the most to you!

Photo by Debbie Hudson on Unsplash