When someone lives with large amounts of clutter it is often the result of fear. 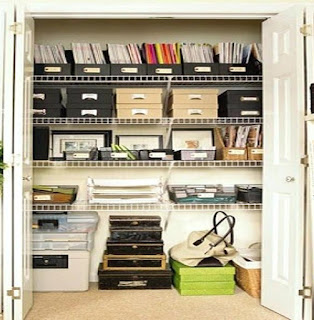 My mother's clutter was organized.  It was neatly packed away in storage containers, all clearly labeled and precisely arranged in every drawer, cupboard, closet, garage rafter area, and shed.  She could always find what she was looking for, even if piles and bins had to be shifted in order to get to it.

Mama would never have called herself a hoarder.  Her house was extremely clean and didn't look cluttered.  There were dozens of magazines in the family room, but they were in a magazine rack.  The books were on shelves.  The games were stowed in cupboards.

Three sets of "everyday" dishes were stacked on clever racks in the kitchen cupboards, and the "good" china had its own cabinet, with bowls, platters, and pitchers carefully displayed.  Yet we had dinner guests only a few times a year.

The linen closet held perfect piles of sheets and color-coordinated towels, enough for a dozen people.  Yet we almost never had overnight guests.

We had several desks.  The tops were dusted and cleared of all but a lamp and maybe one photo, plant, or figurine, but the drawers were packed tight with neatly labeled file folders, boxes of greeting cards, packages of binder paper, pens, staples, paper clips....

My mother often complained that we needed more storage space.  Those cases of tuna and Kleenex, extra sleeping bags, and six-packs of typewriter ribbon took room.  She also often complained about credit card bills, and how hard it was to keep anything in a savings account.  She shopped a lot.

Mama was born during the Great Depression, and also experienced World War II rationing, blackout regulations, and the deportation (and eventual return) of her Japanese-American classmates.

It's likely that early scarcity fueled her desire to always have more than enough.

It's possible she had an unrecognized phobia, and that those carefully hoarded and organized piles were a form of self-protection.

Can't we all relate to this, at least a little?  We all have possessions that strike an emotional chord, either in a positive or a negative way.

I have two scrapbook photo albums that are precious to me.  I began creating them as I raised and home schooled our two daughters.

Then one day our younger daughter told us that she had known from the age of 4 or 5 that she was male.  Her body was female, but she felt in her mind and soul that she was male.  She had decided to reveal her secret struggle, and planned to transition in order to live a full, true life.

That brave but shocking and heart-breaking revelation led our family on a journey we never expected.  My husband and I couldn't understand what our child was going through, and we had to educate ourselves and manage our own intensely emotional transition.

Five years later, I think of myself as the mother of a daughter and a son.  We've supported our child's transition, but this experience has tested our faith and our marriage, and has permanently changed relationships with some relatives and friends.  It is an understatement to say it has not been easy.

My son made his legal transition a few years ago.  His male identity is recognized by the government in the form of a new birth certificate, Social Security card, and driver's license.  In a legal sense, his birth name has been erased.  But I have a copy of the original birth certificate, which recorded one of my most significant life events.  I have twenty-two years' worth of pictures.

I do not mourn for my child, because I'm very blessed to have my son!  But I can't forget the daughter I raised, and sometimes I miss her.  Sometimes I feel like I failed her, since I didn't recognize her pain and despair.

The scrapbooks commemorate the life we lived.  That's why I keep them.  They feel essential to me.

Minimalism is not about owning nothing.  It's not about living a nomadic life with one change of clothes and a bowl, unless that's what gives your life meaning.

It's probably a good idea to keep an extra blanket, an extra package of toilet paper, or extra batteries for the flashlight.  And just as there's nothing wrong with eating your favorite comfort food, there's nothing wrong with keeping your parents' wedding photo, or your child's favorite stuffed animal that went everywhere, or the first valentine your husband ever gave you.

At some point, comfort becomes sabotage.

My mother's hoarding was a mechanism to help her deal with her childhood fear that in the future she wouldn't have enough of what she needed.  Does your clutter represent fear?

If you're keeping stuff you never use because you "might need it someday" (or worse, you think your kids might need or want it someday), then you might be trying to build security against your fear of the future.  If you're storing all of your children's toys, or all of your parents' furniture, or all of your high school trophies, then maybe you're afraid to let go of the past.  You're afraid those memories will disappear if you don't have tangible reminders.

We all experience uneasiness about an unknown future.  We all have emotions that make us cling to the past.  Let's admit it, and turn our focus to all that we have and feel and experience today.

Sure, keep an extra box of cereal, a few canned foods, and some frozen chicken breasts.  Keep a tube of toothpaste and a bar of soap for when you run out.  Display some family photos, use Grandma's favorite quilt, or play your dad's guitar.  But don't be a hostage to fear.  Declutter, and find lightness and hope today. 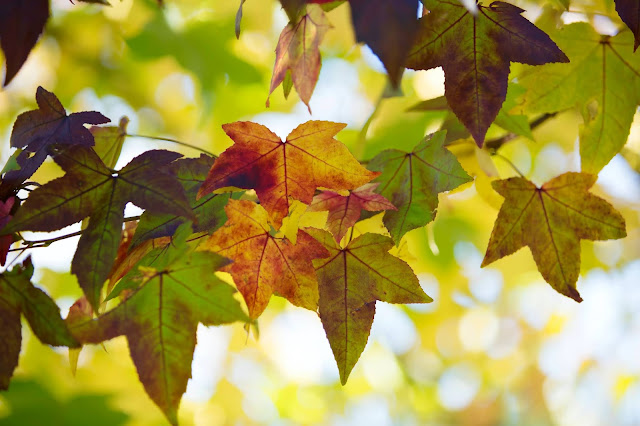 For many of us, lovely autumn is finally here.  For those who live in the southern hemisphere, it is the beginning of another spring. Either way, it's a fresh start. You might already know that I get tired of heat and summer sun, month after month.  Here in northern California, it's almost a miracle to have temperatures lower than 90℉ or to receive any rain at all between May and October.  I think it is almost as difficult as a long, cold, snowy winter, and my husband and I lived in Denver for a while, so I have experienced that type of climate as well and have some basis for comparison. I am quite ready for cooler temps, cloudy skies, and the variety of color and change that autumn provides (it's just like spring in that respect).  I always feel a surge of energy at this time of year, and I'm ready for a new project or challenge. Does the change of seasons make you feel the same?  Are you itching for change and a challenge?  Rather than focusing on a new fall wardrobe,
Read more 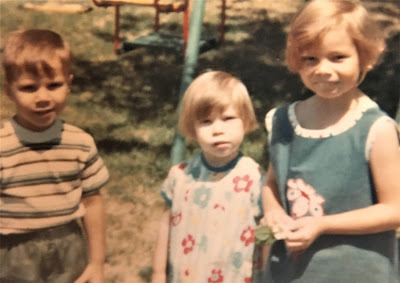 What does minimalism look like to a Baby Boomer?  It looks nostalgic. I remember a neighbor's clutter-free home, minimally furnished in what is now called Mid-century Modern.  Wood floors, white walls, sleek yet comfortable furniture in neutral colors, a few large bright paintings, and a bit more color added with throw pillows and a burnt orange armchair.  This was very different to my home, which had a lot of dark Early American furniture, patterned upholstery, drapes, and wallpaper, and many knickknacks. Housework must have been simple across the street because of the lack of clutter.  Their kitchen was also simple with open shelving instead of closed cabinets.  I think there might have been a dozen glasses, plates, and bowls for the family, and just a few pots and pans – also unlike the overly full cupboards of my childhood home. But my family was more minimalist when it came to clothing.  I remember having three pairs of shoes – for church, school, and playtime.  I also had may
Read more

Look to the End 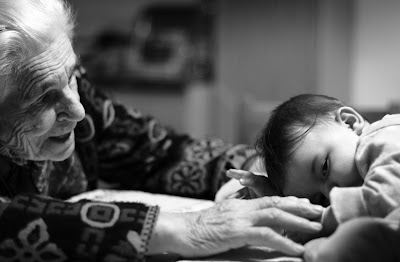 Everyone knows that their life will end someday, but no one likes to think about it.  Which is unfortunate, because as soon as you start thinking about the end of your life, you start to live differently. I believed I was thinking about the end of my life when I considered retirement.  I planned how to save in order to make my final years as comfortable and worry-free as possible.  I made a plan for how to distribute my possessions once I'm gone.  But all of it was still theoretical.  I figured my final days were far in the future, and even as I planned for them I didn't take them seriously. Of course it's normal to put a lot of energy and focus on a career.  No one wants to be stuck in a dead-end job with no challenge and no future – we want to climb a corporate ladder, or become a success in our own business.  We want tenure, and publication in peer-reviewed journals.  We want starring roles, medals, and awards.  Or we want to be social media influencers and the subject o
Read more 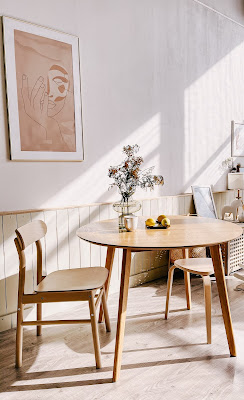 If you're new to decluttering, in the middle of decluttering (and feeling a little overwhelmed), or just wanting a bit of a tune-up, it's always a good idea to get back to basics.  Let go of your fear, let go of your guilt, and simply focus on your lovely, peaceful future with a home that holds everything you need and want and nothing you don't. 5 Steps to Declutter 1.  Remember why. There's a reason you decided that you want to live with less.  It's different for everyone – what is it for you?  Some people want more space, time, freedom, or money.  Others are looking for less stress and frustration.  Maybe you want room to entertain, to paint, to do yoga, for your kids to play, or simply to rest.  Knowing why gives your decluttering a purpose.  And if you aren't sure, this and this will help. 2.  Be clear about your goal. Remember that this isn't a mission to organize your stuff.  If organizing worked, you'd be organized by now.  Change your focus fro
Read more

Upgrade Your Closet From Sad to Satisfying 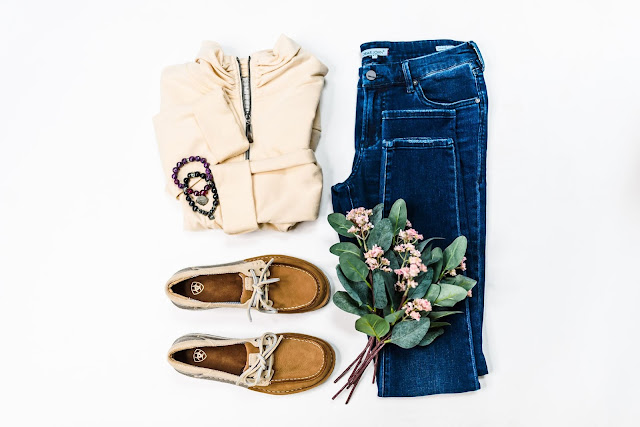 What am I going to wear? It's the most common question women ask themselves when they open up their closets, and it stirs up two very different emotions:  excitement or frustration. Based on my own experience, and the experiences of other women I've talked to, the feeling of excitement isn't very common.  Sometimes we get it when we've purchased a new outfit, but even then there's no guarantee.  How often have you brought new clothes home only to find that they don't fit, feel, or look as good as you thought they did in the store?  They end up in the back of the closet, tags still on, a reminder of fashion failure. And even if a new outfit is a success, the novelty fades, and our consumer society steps in with ads and promotions that promise even more pleasure if you make another purchase.   The results of buying new clothes every week aren't great.  That fast fashion fix leads to: a closet that's even more packed and hard to keep in order a bunch of cre
Read more