How to Win at Hide and Seek (Minimalist Challenges Part 9) 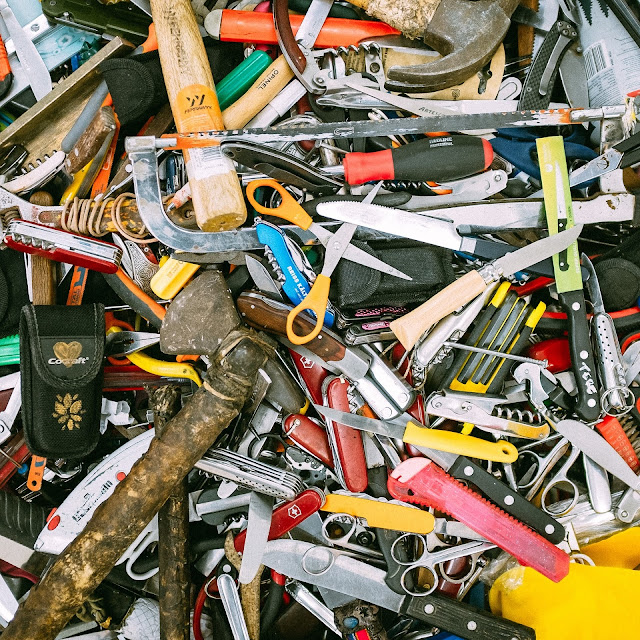 Clutter is the physical manifestation of unmade decisions fueled by procrastination.

Do you play hide and seek?

When I was a kid my brother, sister, and I usually spent a summer week or two at my grandparents' house.  Two of my uncles lived nearby, so we were able to visit with my eight cousins as well.

One of our favorite games was hide and seek.  My grandparents' place had several outbuildings (one of which held two defunct autos we were allowed to play in), a large garden, a small orchard, and some huge old trees bordering the neighbor's cotton field.

Imagine ten kids scurrying to hide while one of them – "It" – counts to 100.  There were tons of hiding places and a lot of old stuff to hide in and behind and underneath.  As "It" located each kid, they joined together in searching for the rest, so eventually ten children were looking for the last one.  It was exciting, dirty, sweaty, and so much fun.

You know what's not fun?  Playing hide and seek with your belongings because you have so much you can't keep track of it.  Stuff winds up in, behind, and underneath other stuff, and you spend a lot of time looking for those "lost" items.  You're always "It" – constantly frustrated by the hide and seek you play with your keys, remotes, paperwork, tools, clothes, or other things you know you have "somewhere."

Do you have a habit of stashing things in a drawer or a closet because you think they might come in handy someday, even though you don't really have a use for them?  Do you pile things in the garage or basement because you aren't ready to part with them but have no room for them in your house?  Do you get anxious or annoyed searching through a bunch of extra junk for the things you need?  Do you look at that jam-packed muddle of who-knows-what, feel overwhelmed, and just slam the door on it?

You may not look at it, but you know it's there.

We all put things off.  Sometimes we're tired, distracted, or worried about something else.  Other times we just don't care for a task, or we're afraid we won't be any good at it.

But the longer we live, the more stuff we accumulate.  If we avoid making decisions about what to keep and what to discard, or where to store the things we need and want so that they're easy to retrieve and put away again, it won't be long before our homes are crowded, messy, and dysfunctional.

Maybe you just try to ignore your bulging closets and the garage you can't park a car in.  But living with less reduces frustration.  It makes your home more peaceful and relaxing.  It smooths every task, including cleaning, cooking, laundry, bill paying, and more – which leaves you with more time and energy for the things that are really important.

Start winning at hide and seek with these challenges.

Which task have you been putting off?  Maybe you think it will be boring, or strenuous, or you're afraid you won't do it correctly.  Imagine how you would feel if it were finished and behind you.  Let go of the anxiety and dread that is building because of your procrastination by doing the task (or listing the steps and taking the first one) TODAY.

Whether that half-forgotten mess is in a junk drawer, a back closet, the space under your kitchen or bathroom sink, or a storage shed, we're not just going to slam the door shut anymore.

Pull everything out and clean the area.  Separate the things you actually use at least once a year from all of the stuff you simply stashed away.  Return the items you need and make a plan to get rid of the rest.

I realize that there might a lot in this out-of-sight, out-of-mind spot, and you may not be able to clear it out in 30 minutes.  But you can give it 30 minutes of your attention today.

Has your car become a storage space... or even a dump?  If so, empty it out, wipe down the dash and the cup holders, and vacuum.  Only return the things that belong in a car.