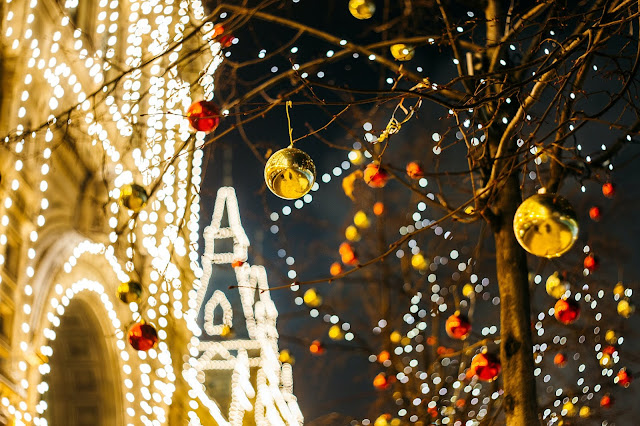 I never thought I'd do this, but I'm publishing a children's book for the Christmas season!  It's still in preparation, but should go live by later today or tomorrow.  What's really exciting is that I'm publishing in a Kindle edition (which can be read on any device with Amazon's free Kindle app), a paperback edition, and a hardcover edition (a brand new option).

* This blog is reader-supported.  If you buy through my links, I may earn a small commission.

The book is called Fairhaven Christmas Eve (here is the link, which has just gone live as I'm writing), and this is how it begins:

It was the morning of Christmas Eve, and everyone in the city of Fairhaven was very busy.

The bakers, who had stoked their fires early, were taking delicate cakes from their ovens and placing them on marble counters to cool.  The icers were mixing their colors and forming sugar roses, getting ready to decorate the cakes.  The grocers were building pyramids of their ripest fruits and vegetables, the butchers hung fat pheasants and geese, and the dairymen were bringing warm new-laid eggs and cold creamy milk to market.

On the street of the tailors, the silks and ribbons and bonnets and gowns were displayed in windows that sparkled in the cold sun.  One street over, the booksellers had tables of lavishly illustrated stories for children, and shelves of richly bound classics for their parents.  Around the corner, the candy makers filled tall glass jars with peppermint pillows and butterscotch balls, lemon drops and licorice allsorts.  Chocolate confections shaped liked birds and reindeer and Father Christmas himself filled special display cases.

At the center of the town square, across from the Mayor's palace with its golden dome, was Mr. Pickwinkle's toy shop.  Here was a wondrous collection of dolls that walked and talked, wooden trains that chugged and tooted along their tracks, balls that bounced so high they flew, and a rocking horse that came to life at the full moon.  There were masks, and drums, and tea sets, crayons in 341 colors, and musical snow globes with tiny scenes that rotated when their keys were turned.

Mr. Pickwinkle's assistant, Marla, could not keep the windows clean, for every child in Fairhaven pressed their fingers and noses on the glass!

I hope this whets your appetite for some more of the story, because it's just getting started.

I love this little scene that takes place a bit later on:

Mr. Pickwinkle was surveying his wonderful toy shop with a critical eye.

"There is nothing to signify Christmas in here," he complained to his manager Mr. Broom.

"There are wonderful toys galore, sir," replied Mr. Broom.  "It looks like Santa's workshop.  How can you say there's nothing to signify Christmas?"

"I do say it," insisted Mr. Pickwinkle.  "You know Christmas means far more than that."

"The Mayor says all of that belongs in church.  It's not discussed in town hall, or school, or the shops.  Let the church worry about it," said Mr. Broom.

"I think a baby doll in a packing crate would not be amiss," decided Mr. Pickwinkle, ignoring Mr. Broom's comments.  "Arrange it in the middle window with some of the larger toy sheep and the rocking horse.  Hang a string of twinkle lights right above, and make a sign that says 'Happy Birthday, Jesus,' or some such."

Mr. Broom grumbled a bit, but quietly, and went to do as he'd been told.  He found a life-size baby doll with a blue flannel blanket, grabbed a wooden crate and some excelsior, and created the little scene Mr. Pickwinkle had described.  There were several sheep, and he placed the wooden horse behind the crate so its rockers weren't noticeable.  He draped several strings of golden-white lights on a trellis overhead, and found a quite realistic-looking plush owl to overlook the little tableau.

His assistant Marla hung a silver "Happy Birthday" banner from the party goods section, and spelled the name "Jesus" with wooden initials from the nursery décor section.  Mr. Broom thought the scene looked like something a child would put together, but Marla thought that was appropriate.  "It's not fancy," she thought, "but Jesus was never fancy."

And so the window was ready for the children of Fairhaven to discover.

I think it's pretty obvious that this little children's story has a Christian slant; that's because I have a Christian slant that I don't generally write about on this blog.  I'm not trying to offend anyone, but that's the way this charming story goes.

I'd be thrilled if some of you purchased Fairhaven Christmas Eve for the children in your life.  As with my book A Minimalist Holiday, I'll be donating half of my November royalties to World Vision.

Photo by Marina Khrapova on Unsplash